In the weeks leading up to Ironman Emilia Romagna I was nervous without knowing why. I kept asking myself why I should do this race if the mental preparation was going to crush me. The training was going well, but the summer heat just never seemed to end.

Training in August, when I had the most mileage, was the hardest. I struggled with perpetual fatigue that would not go away. If they’d told me they’d changed the date of the race to August 20th I would have said yes, I’m ready to do this. I was that tired of swimming, cycling and running.

But in September, the weather took a cooler down. September 23 arrived in the blink of an eye.

I went to Cervia on the Thursday before the race so I could prepare without rushing. I booked a hotel 400 meters from the finish line, a perfect location. On Thursday evening I went with another American friend racing to the athletes welcome dinner. It was amazing to be surrounded by so many foreign athletes, 70% of the field!

Friday morning I went for a test swim in the Adriatic. The water was cool but not cold and with minimal waves. I brought my bike to check-in, first checking the wheels. I put my transition bags in place and then went to the train station to pick up my husband Piero. We had a romantic dinner in a local restaurant and then it was early to bed ready for the 5:30 a.m. alarm. 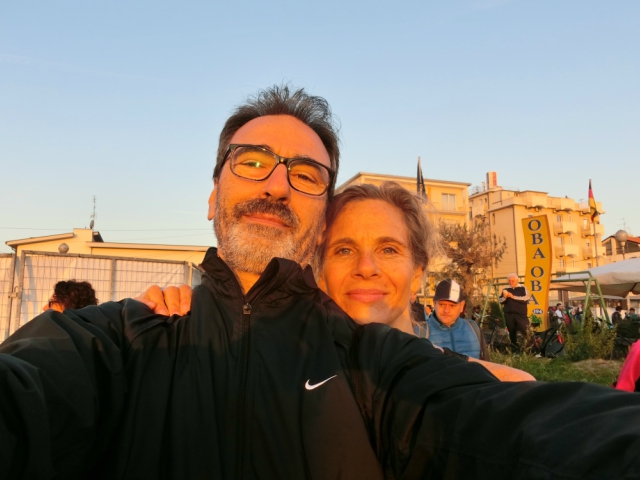 I couldn’t wait to start the swim. This year I had changed my training approach by focusing a little more on the distance. The workouts still consisted of drills, progressions and intervals but the total mileage was never less than 3000 metres. At the start I self seeded myself at 1:20:00 – 1:30:00 because I’m an honest competitor. I noticed that 89% of men were almost all crushed into the faster times… 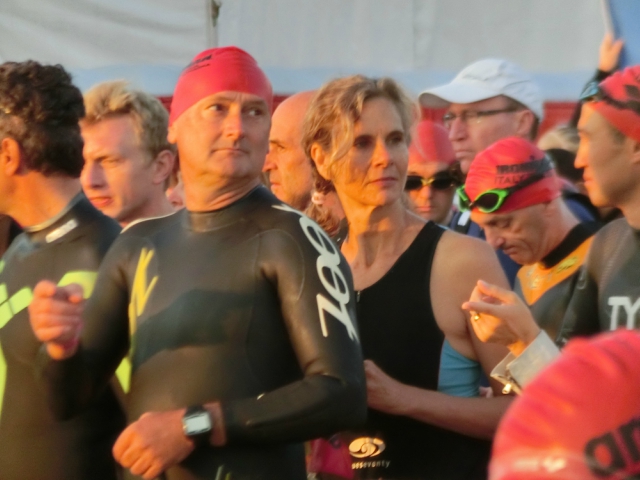 As soon as I dove in the water I was surrounded by all those “fast” males. I’ve done an infinite number of women only starts, and men are just animals in comparison. One guy was doing a backstroke after only a hundred metres. I got kicked in the head a few times and even found another athlete holding onto my hips. I had to stop and ask him to cut it out. I tried to stay calm and remind myself that we’d all thin out after a kilometre or so.

In the first 2,200 metres the sea was pretty calm andI could swim easy. The buoys were visible and well positioned so you always knew where to go. I still saw swimmers left and right of the line they should have been following. I tried to concentrate on keeping a straight so as not to add any distance.

We did an Australian exit and then dove back in the sea for the last 1,600 metres. This is where I came upon “Frogman”. He was doing breaststroke for the entire distance. I have to admit that he was good at it. It took me at least five minutes to pass him, but while trying he kept swimming in my direction and kicking me sideways. The waves had increased and I had to sync my breathing to avoid swallowing the salt water. 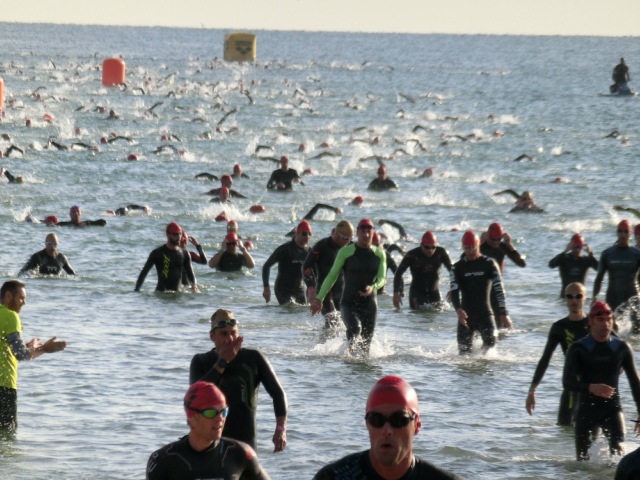 The distance from swim exit to the end of T1 was almost a mile. You really couldn’t waste any time there, so running was a must even for the transitions.

This year I’d decided to use a one piece for the whole race. I just needed to changed my shoes and add a cycling jersey. This had two functions: keep my tummy warm and carry my nutrition in the deep back pockets. Dressed and ready to face 180 kilometres, I grabbed my bike and exited T1.

I got on my bike right after the red line and heard my front wheel go flat. I remember saying, “No, no, no, no, noooooooooooo!!!!!” Or something like that…

I went into total panic. There were tears. Repairing a flat had always been a group project done while laughing and having fun. There was nobody there to help and I was on my own. I asked the race referee where the bike mechanics were but they just indicated where the pumps were placed and told me to get out of the way.

Still in panic mode and with hundreds of triathletes flying by me, I desperately tried to think and process what I needed to do.

“Set aside your emotions and concentrate on what you need to do to get yourself out of this situation. THINK!!! WHAT DO YOU NEED TO DO NEXT?”

I slid the tool kit out from under the bike seat. I opened up the tire and pulled out the tube. Then another few minutes of panic. Thoughts flew through my mind about Karma, life lessons and the fact that nothing grave, dangerous or important was happening in that precise moment. I have friends going through some really difficult life situations right now. This was not one of those. It was just a flat tyre that needed to be repaired. That’s it.

Suddenly, someone from the race organisation appeared with a smile on his face. He gently took my arm and told me that the bike mechanic was now waiting for me just a few feet away.

In two minutes the bike mechanic finished the job that I’d clumsily started. Twenty-two minutes had passed that would be added onto my final time, but at least I could get on my bike and start my race again.

The bike course was surprisingly beautiful. We passed by a lagoon filled with pink flamingos. On the highway portion you could pedal fast and fluidly. At the turnaround in Bertinoro there was a steep hill that broke up cheater drafting packs and cut out the monotony.

In any case, when you got to the top of the 15% grade (a lot of triathletes simply walked it), there was a nice long downhill where you could recover some time and energy. The course was completely closed to traffic and with some great cheering sections along the way. 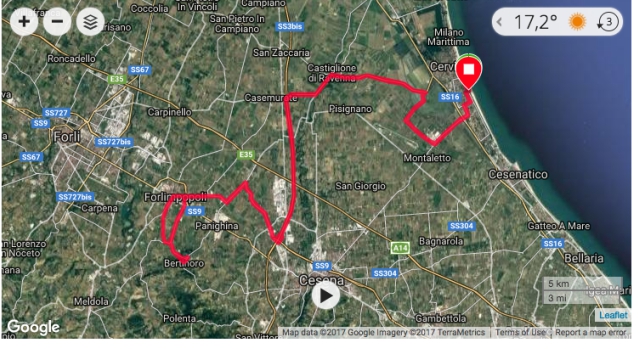 Was there any drafting going on? Of course there was! At kilometre 150 I came upon the scene that made me laugh the most. On a straight and windy section an M60 Italian triathlete (you could read it on his bib, facing back) was drafting off a Danish guy. With just a few inches between their wheels the Italian nervously checked behind every ten seconds to make sure a race referee wasn’t coming to disqualify him. What are you going to do? To each his own race!

There’s always a moment during an Ironman when you start to feel weary of being on the bike, but then you remember that a marathon awaits you! So those last few miles on the bike are a bittersweet pleasure. I was ready to see my husband, interact with fellow triathletes and greet my friends that had come to enjoy the show. Bring on the marathon! 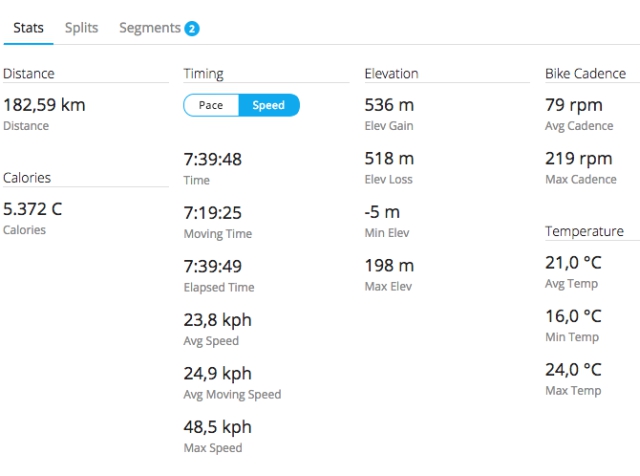 To the first people I saw on the run course (Alessia, Piero, Alina…) I immediately started whining: “I got a flat tyre!”.

Rightly so they reminded me to focus on the here and now. I was now running. The past was the past.

My tummy felt right on the edge so I knew I had to be careful with my nutrition. The idea of sweets repulsed me whereas I was craving anything and everything salty. I looked at what the first aid station offered and formulated my plan. A piece of banana with a few pretzel sticks washed down with water for the first half of the marathon. In the second half I’d add watered down cola to get a bit more sugar in circulation. It turned out to be a winning formula without any pit stops.

The run course was lovely and with scenic variety. I baptised the nicest section, “The Magic Forest”. It was a pine forest with amber coloured bulbs strung up through the trees to light the way for an entire mile. I made a pact to run the entire length of The Magic Forest. It was easy to do, losing myself in the pine scent and the silence of the night. When the runners entered The Magic Forest they’d talk in hushed whispers until they were on the pavement again. 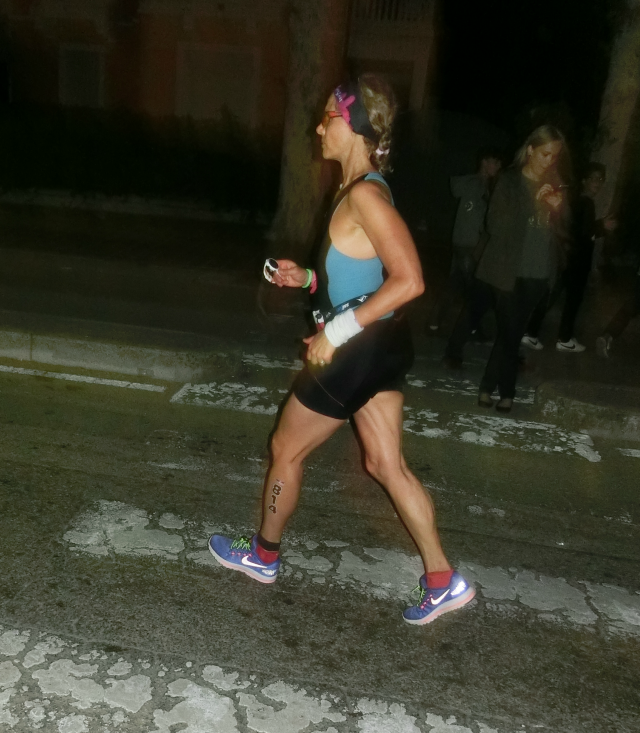 I walked and ran without any decision on how or when. I know that you can’t walk for long distances or else you’ll lose too much time. I walked 100 metres and ran 400 metres. I alternated 100 metres of walking with 100 metres of running. Any combination to get myself moving forward.

I walked for a bit with my friend Alessandro, then I walked with Massimo who I hadn’t seen in years. I saw Alessia, Daniela and Alina on each lap. And then always Piero. Just his presence had a calming effect on me (insert hearts…).

The fourth lap was my fastest. I thanked all the volunteers, I said goodbye to The Magic Forest, I waved to all the diners at restaurants in the Milano Marittima and with pure joy I ran down the chute to the finish line.

Alina snapped this beautiful photo at the finish line and she gave me my medal. But when I exited the athletes garden, that’s where the biggest surprise of the whole day awaited me.

My dear friend Mauro Mongarli, his wife Marcella and their daughter Laura had come to see the race. I met Mauro in 1997 when I raced my first Olympic triathlon in Forte dei Marmi. He’d generously given me advice on how to prepare for and race a triathlon. I hadn’t seen him in ten years and if I hadn’t become covered in salt and sweat I would have given all three of them the biggest hug! True friendships like this are really precious and I don’t take them for granted.

A week after Ironman Emilia Romagna, I’m still in that dreamy state where you feel like you’re on a cloud all day. I relive the positive race moments and I’m still enjoying an endorphin high.

People have asked what I’m going to do next and if there’s another Ironman in my future. Right now I don’t have an answer. It’s a great race, I love doing it, but it takes a lot of physical and mental preparation. For now I’m enjoying the extra time with my family, lounging on the couch while we watch a movie together, without me falling asleep from exhaustion.